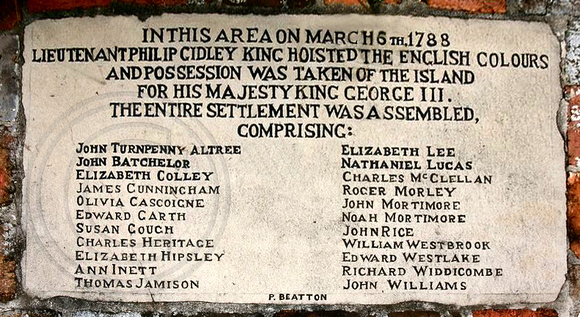 H.M.S. 'Supply' sailed from Sydney soon after the First Fleet reached Sydney Harbour, out into the vast South Pacific Ocean on a thousand mile journey to an island measuring five miles by three.
Norfolk Island was sighted at 11 a.m. on the 29th of February and for five days the vessel sailed to different points around the coast, endeavouring to find a place to land. Just six weeks earlier, the great French explorer, La Perouse, had found landing behond him. He described it as a place fit only for 'angels and eagles' Lieutenant King began to share this view.
Faced everywhere with surf lashed cliffs up to 300 feet high, he managed to secure a toe-hold at a couple of spots but found nowhere suitable for the landing of a large party. Eventually, at a spot King named Sydney Bay, his Ship's Master discovered a channel through the reef sufficiently wide to allow the passage of the larger launches, the longboat and the pinnace,a small vessel used as a tender. REF
© * BLACK DIAMOND IMAGES *
Powered by ZENFOLIO User Agreement
Cancel
Continue