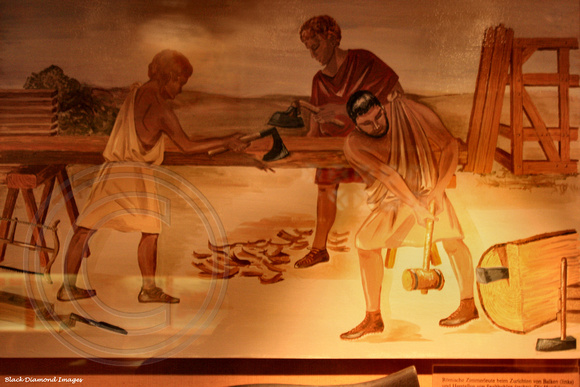 
More than 2000 years old, Saalburg Fortress is located on the northern limits of the Roman influence, the frontier between the Roman Empire and the Germanic tribal territories largely occupied by the Teutons.
Sustained invasions by the Teutons to around 260 AD finally forced the Romans to give up the Limes and Fortress which then degenerated until restoration work was initiated under German Emperor Wilhelm II in 1900.

"During the Roman period the Saalburg was a fort which was used to safeguard the Limes border from the Teutons. About 500 to 600 soldiers were stationed here. The village with its craftsmen, traders and taverns was located in front of the main gate of the defense wall. Altogether, up to 200 people might have lived here" Reference

The Fortress was rebuilt on the southern slope of the Taunus, not far from Obernhain and Frankfurt and is the world’s only reconstructed Roman fort and archaeological museum.
In 2005 its cultural significance was recognised when it was awarded UNESCO world cultural heritage site status - together with the Limes - the Roman Boundary Wall.

The remains of the Limes in the Taunus constitute some of the best preserved traces of the Upper German-Raetian Limes, which is the largest ground monument in Europe. The "Limeserlebnispfad" is about 30 kilometres long, and encompasses all of the elements that made up the Roman border installation: Ridges and trenches, and the ruins of watch towers and fortresses of different sizes. Reference

The Rundweg Saalburg is a 2.4 kilometers long trail passing archaeological monuments and reconstructions. Six boards along the route provide information in German, English and French.

The trail takes about 45 minutes to walk but more time is needed to explore the Fortress and Museum within the restored Saalburg Roman Fortress walls. Many of the former buildings have been meticulously rebuilt and a comprehensive collection of Roman Artifacts are held in the Archaeological Museum.
The on site Taberna Cafe provides an opportunity to see how the Romans enjoyed the culinary delights of their time here in this northern Roman Empire outpost.
© * BLACK DIAMOND IMAGES *
Powered by ZENFOLIO User Agreement
Cancel
Continue