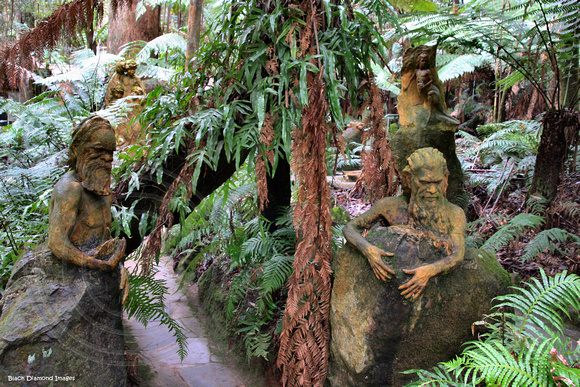 The William Ricketts Sanctuary exhibits the sculpturally significant work of William Ricketts (Born 1898 - Died 1993 aged 94).
Set in a tranquil natural bushland setting the sanctuary is a place for quiet reflection and is now managed by Parks Victoria.
Originally named as 'Potters Sanctuary', in 1934, Ricketts commenced in that year what was to become a 50 year expression of one man's dream.
The Sanctuary today is a unique collection of 92 intricately sculpted kiln-fired clay, mostly Aboriginal figures, set discreetly in a 'fairy glade' setting on, and among rocks, treeferns (Cyathea australis and Dicksonia antarctica) and the worlds tallest species of hardwood - Mountain Ash (Eucalyptus regnans).
The sculptures are a remarkable expression of Rickett's philosophy - that all people need to act as custodians of the natural environment maintaining and respecting nature as he felt Aborigines had done prior to European settlement.
The Victorian Government recognised the significance of Ricketts work in the 1960's and purchased the property in order to preserve this place for all.
Ricketts continued living on the property till his death in 1993 continuing to spend time among Aboriginal communities in Central Australia , the source of his inspiration. He always returned to the Dandenongs though where his dream would steadily evolve of creating an idyllic natural and artistically significant memorial to the sense of connection with the land and the way of life of past indigenous Australians.

I had previously visited the William Ricketts Sanctuary some 20 years ago and at that time felt the strong sense of connection Ricketts had with the earth, the Aboriginal people and all nature.
Returning in April 2010 I was reminded that this is a truly unique spiritual place of great tranquility and serenity and a place that all Australians should try to visit at some stage.
Other spiritually comparable places I have visited include Machu Picchu in Peru and to a lesser extent - Paronella Park in Queensland's north, just south of Mission Beach.