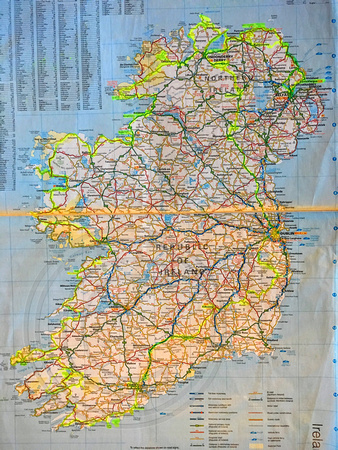 Eventually I'll add some of these images to Flickr HERE, at which time I will try to provide more details.

3.100+ km around an amazingly scenic country with so much more left to see on a possible future trip. Following the Causeway Coast through Northern Ireland we joined the Wild Atlantic Way in the Republic of Ireland at Malin Head, Ireland's northern most point, and followed it to Old Head of Kinsale, not far from Ireland's southern most point, before heading inland to Cork, Kilkenny, over the Wicklow Mountains and returning to Dublin. We rarely took main roads, preferring smaller towns, national parks, coastal routes, harbours and beaches to larger towns. Throw in a serving of historic castles, priorys, pubs, and Irish singing and dancing and Ireland became one of our most memorable holidays. Ever present rock walls and narrow country lanes do present a high risk driving concentration challenge so a 'Nil Excess' insurance package on your hire car is well worth considering.
© * BLACK DIAMOND IMAGES *
Powered by ZENFOLIO User Agreement
Cancel
Continue